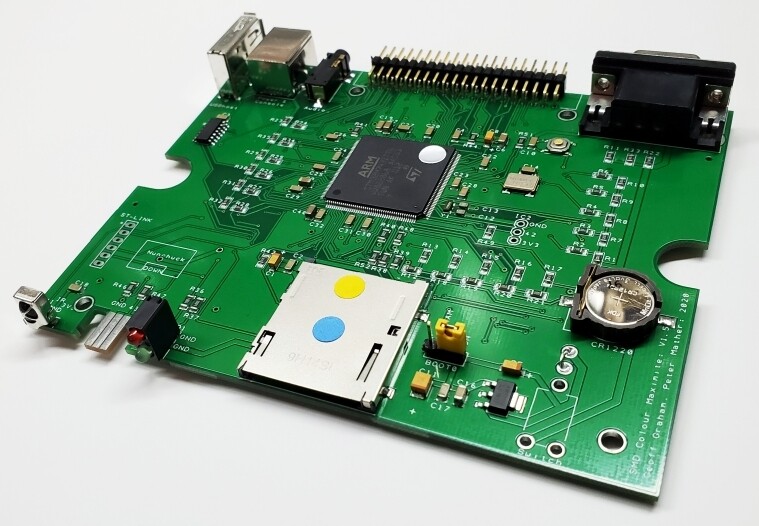 CircuitGizmos now has a Color Maximite 2 design called the RetroMax. The RetroMax will run the same CMM2 software, but is enhanced with more features! See this link:

The Color Maximite 2 (CMM2) is a small self-contained computer inspired by the home computers of the early 80's such as the Tandy TRS-80, Commodore 64 and Apple II. It includes its own BASIC interpreter and powers up within seconds into the BASIC interpreter (there is no operating system to boot). The emphasis is on ease of use and, as a result, a first time user could enter a small program and have it running within minutes.

While the ease-of-use and built-in BASIC concept is borrowed from computers of the 80's the technology used is very much up to date. The CPU that powers the Color Maximite 2 is an ARM Cortex-M7 32-bit RISC processor running at up to 480MHz with 2MB flash memory and 1MB RAM. This processor includes its own video controller and generates a VGA output at resolutions up to 800 by 600 pixels and with up to 16-bit color.

Some features of the CMM2:

- Extensive features for creating computer games. These include multiple video planes, support for Blits and Sprites and full support for the Nunchuk a game controller.

For an introduction to the Colour Maximite 2 go to: http://www.thebackshed.com/forum/ViewTopic.php?FID...

Right now we do not have the case for the CMM2 in this PCB layout. The case by itself can be obtained from various sources.

If you perform a firmware upgrade, be sure to remove the battery during the upgrade. Then re-add any OPTIONS that you may have set after reinserting the CR1220 coin cell.