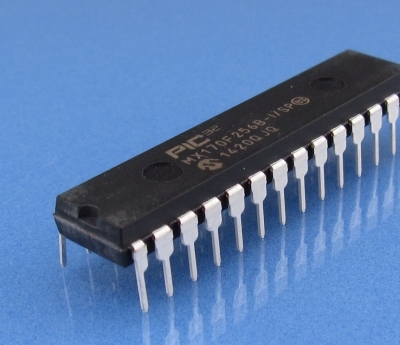 Maximite computer on a chip - single DIP microcontroller. Run BASIC programs to interface to your electronics

The Micromite MkII is a PIC microcontroller programmed with the MMBasic firmware. This chip is an easy to use 28 pin dual in line package which can be easily soldered or plugged into an IC socket.

MMBasic is a Microsoft BASIC compatible implementation of the BASIC language with floating point, integer, and string variables, arrays, long variable names, a built in program editor and many other features. Using MMBasic you can use communications protocols such as I2C or SPI to get data from a variety of sensors. You can measure voltages, detect digital inputs and drive output pins to turn on lights, relays, etc. All from inside this 28 pin chip.

Special features include an IR remote control receiver and the ability to easily use LCD displays, keypads, temperature sensors, distance sensors and more. Everything is internal to the Micromite and it will run from a couple of AA batteries. The only extra component required is a 47µF capacitor.

In summary the features of the Micromite MkII are:

The Microsoft compatible BASIC interpreter is full featured with floating point, 64-bit integers and string variables, long variable names, arrays of floats or strings with multiple dimensions, extensive string handling and user defined subroutines and functions. Typically it will execute a program at 30,000 lines per second.

Compiled C or assembler routines can be inserted into the BASIC program for speed or to access special features of the PIC32 microcontroller.

Nineteen input/output pins are available on the 28 pin chip. These can be independently configured as digital input or output, analog input, frequency or period measurement and counting. Ten of the pins can be used to measure voltages and another seven can be used to interface with 5V systems.

Programming and control is done via a serial console (TTL voltage levels) at 38400 baud (configurable). Once the program has been written and debugged the Micromite can be instructed to automatically run the program on power up with no user intervention. Special software is not needed to develop programs.

Australian forum with some support and examples for Micromites: The Back Shed