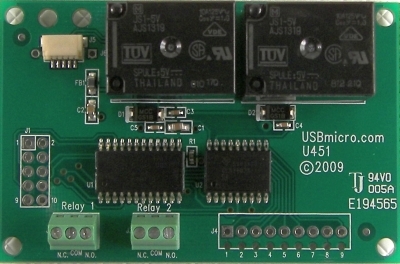 The U451 provides a simple digital i/o interface for the PC (Win/Linux) or Mac (OSX) . Two relays, six transistor outputs, and eight i/o lines from the microcontroller are provided. Commands can be sent to the U451 that change the eight i/o lines from input to output. I/o lines can be individually selected as inputs or outputs. The U451 supports commands to read the ports, and if the ports are set to output, to write to the ports.

The U451 interfaces to the PC (Win/Linux) or Mac (OSX) via the USB port. An application on the PC (Win/Linux) or Mac (OSX) controls the U451. The U451 does not use any custom drivers, just the drivers that are a part of the operating system. Custom software can be developed to use the U451, or the applications that have been created as examples here can also be used.

Comes with USB cable - no need to purchase one separately.